Success can be defined in different ways. And no, success is not when you find some stupid quote of Tumbler and claim it as your “motivation for life” on your Instagram page. In sports, success is when you work so hard as a team that you win a championship. In writing, success is when you write a New York Times #1 Best Seller. In school, it is when you push yourself to get the desired grade that you had been wanting for so long. Now, when you look at a television show, what do you think makes it successful? Could it be when a show succeeds so well that everyone has clothing from the show? Could it be when fans buy every DVD that a show has to offer EVEN including a DVD just the outtakes? Or could it be that a show is successful when the creators have gotten the message that they intended.

My personal definition for what I mean by a TV Show succeeding is when a show has an enormous following of not just fans but “haters”, people creating their own content to deliver personal reviews on the show, and are willing to go out of their way to get more connected with the characters of the show.

Examples of successful TV Shows for me are Friends, Friday Night Lights, Seinfeld, The Office, House, Lost, Mad Men, Entourage, House Of Cards, and The Simpsons. The reasons why they are successful to me is that they meet all my criteria. You have millions of fans watching Family Guy that they started their own fan club for people to visit. You have people creating their own content about what they feel about Lost’s Final Episode. Lastly, you have someone creating a Twitter page for Friends so you can be reminded of old episodes and have quicker contact with the actors.

Making A Murderer has a different fan base compared to the other TV Shows that I had mentioned. People who have watched the show, do not HATE  the show, but they can HATE Steven Avery. Or at least that’s what I think. Since the creation of the show, a Facebook group was made called the Steven Avery Project which is to help get him free from prison and not allow others to be in the same situation as him. It currently almost has 110,000 followers. The show was created 4 months ago! Now, when you bring up the “haters”, you get over 486,000 pages online stating why Steven Avery Is Guilty. 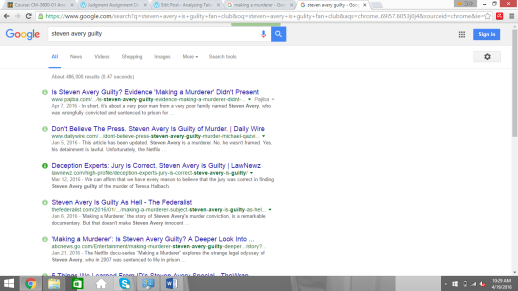 You have millions of people on both sides of the fence on what they think about Steven Avery. With Making A Murderer, you can stream it on Netflix exclusively. However, the show has gotten so big that Netflix has been allowed to stream the episode on YouTube, of course not without a small payment, for people to be able to watch the 1st episode. The video currently has 2.1 million views on it. That’s another 2 million more eyes watching the show than what was previously watched.

The creators wanted to draw people in and they have gotten millions on top of millions of people to watch this documentary series.

Now, have people created their own content in the aftermath of the show being created? 110%. FIRST OFF, Steven got a new lawyer BECAUSE of this show. That is for sure someone creating their own content . Main reason why she’s creating her own content is that his new lawyer, Kathleen Zellner, has been ripping apart everything that was presented in show on her Twitter.

TH throat cut (- blood) Head shot (- spatter) But RAV4 has her blood -so she was put in car & driven 20 ft to burn pit? #MakingAMurderer

Next, Steven Avery’s main lawyers during his trial, Dean Strang & Jerry Buting, are going on a nationwide tour to talk to people about the Steven Avery case. Creating content? Oh of course. They are ride this Making A Murderer wave of popularity and are riding it straight to shore. You know why people are going to go see these two Average Joe Lawyers? It’s because this show is beyond popular and successful.

Lastly, regular people making their own personal reviews. On YouTube alone, you have just under 160,000 videos when you type in “Making A Murderer Review“. You have real people diving into this show and talking about their own personal reactions and what they think about the case. Here’s a few for you to take a look at.

And you actually have people making a LIVING off making review videos for people to watch. Unbelievable.

Lastly, do I think that people would go out of their way to get closer with the characters? Yeah. . Nope, scratch that. 100,000,000%. The main reason why I think so is that during the show, this guy, Steven Avery, had like a million girlfriends waiting for him on the outside and they would go visit him! I over-exaggerate the million girlfriends but he did have two girlfriends during the course of the show. Jodi Stachowski and Sandy Greenman and boy oh boy were they great to him. Jodi was with him during the trial but Sandy had wrote to Steven in prison, and then they started dating. In fact, they got engaged! Except for the fact she has ended the divorce.

As said before, the attorneys are going on the road and making people come and see these real life characters talk about this show. Steven gets a new lawyer because she feels that she can win this case. People have been trying to connect with Steven Avery but the cops will not. They also have a clothing line that you can go out and buy clothes so you can show your support for Steven Avery. Lastly, Brandon Dassey’s half brother created a rap song that talks about how they didn’t do it.

So there you have it. Is Making A Murderer a successful television show? Yes. I believe so. Millions of people have seen this TV series and have in their own head and have decided whether or not Steven or Brandon did it. Now, compare it with everyone TV Show that has been put on this blog and you let me know how you think this show matches up with everyone else and let me know whether or not I am right. 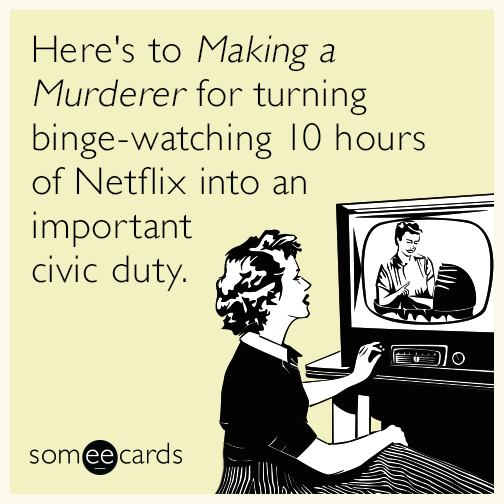