“How are we gonna get out of this one archer!” As Lana runs away being shot at! A line that you will hear in every season of Archer! The team seems to always be in it up to there necks. As you watch the show you start to get a feel for each character and as the show progresses you start to expect certain behaviors from characters. Each character brings something to the table with there witty over the top comments.

Some of the characters don’t have many lines but play a large role in the show. One of those characters being Dr. Krieger. In season 3 you left off where season 2 ended as Bionic Barry kills Archers fiancé  If it weren’t for Dr. Krieger turning Barry into a robot Archers fiancé would be alive. I feel that if Dr. Kriegers character was not so evil and uncaring that the show wouldn’t have its plot twists or funny moments.

Some other characters that you don’t see talk much but have large roles in show comprise of Cheryl Tunt and Pam Poozy.

In latter season you find out the Ms. Tunt is the owner of a railroad company and she infact is really a billionaire. She has her own train cars and owns a mansion. Latter on in the show you see her turn into a famous country singer. You don’t see much of her talking other than vulgar or comically stupid things come out of her mouth.

The show does give you a clear definition of each character. They always depict Sterling as the “Lacrosse playing douche”. I would like to call him the drunk of the show but its hard to do that when his mother drinks as much if not more!

Ms. Archer drinking ISO propyl Alcohol because there is no booze in space.
In this season they even give Mallory Archer her own episode.
Ms. Archer only cares about 4 things

For someone that’s the head of an intelligence agency she shore does alot of stupid things. One being she has a secret relationship with the head of the KGB. This is something i find funny because there is a joke in the show that Major Jackov might be Sterling’s father. The show has a couple jokes that they always play on this being one of. In latter seasons you see them also speculate others who could be his father.

Throughout the show its funny to see if the characters battle their sense of morals. Or lack of. You see first hand all the stupid and terrible things the ISIS gang does. In one season called Archer: Vice the agency goes completely rouge. Something that i love about the show is how the writers purposefully make you guise the timeline.

A couple funny things that is also an ongoing joke is whenever Ms. Archer calls her son he almost never picks up the phone. She is always greeted by his annoying phone messages that trick her into thinking she is talking to someone. Another funny things that Sterling always does is whenever he goes deaf (happens frequently) he makes a honking sound like a goose would. This always has me laughing whenever I hear him making his honking sound.

Season three starts off with the talk of the KGB and secrets from cold war era. As the season progresses it jumps up into the future tech when they are assigned a mission to save a space station. I thought it was interesting that the writers decided to cram this idea into a two part ender. It does keep you on your toes. You immediately want to know what’s going to happen next.

The writers of Archer do a great job of doing this as they do this at the end of every season and in all two or three part series. As a viewer i sometimes forget that the show is a cartoon. I feel that with some of the shows graphic nature it wouldn’t be as funny if it weren’t a cartoon. There is one character that you always gets shot in a graphic manor. Or the amount of times you see ray get shot or crippled in horrific ways wouldn’t make you laugh unless it was a cartoon.

One of the key elements i feel to the success of Archer of being funny is because you are never sure whats going to happen next. The show does follow a story-line that has a lot of twists and turns. Most of the large choices in the show are very spontaneous because they are thrusted into action most of the time. The other problem is that Sterling is super arrogant. He never reads the plans for the mission statements or learn any of the plans for the missions he goes on. There also is a recurring theme of Pam and Cheryl somehow saving everyone it happens in some weird way or they help by accident. Accept for season three where this time Sterling sneaks them both onto a space shuttle. This was funny because they didn’t even know but they almost jeopardized the mission because of this.

The interesting thing about archer is that since it’s a cartoon you always see all the rooms fromt he same angle in every episode. This gives you the viewer only a couple perspectives from the room. Something that archer does well is they emphasize facial expressions very well. By giving close ups of characters faces. 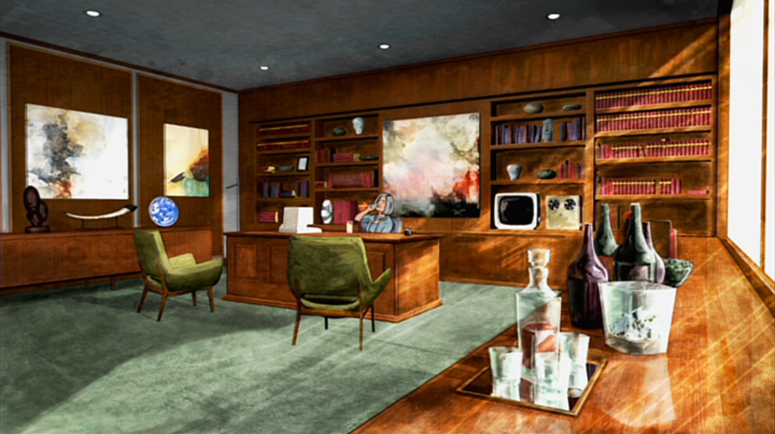 One of the reasons i also love to watch Archer is it take the points that make fun of what some men are like and puts them to the max. You get an idea of the secret agent life that has been made into a dysfunctional but working character.

Archer does cast a few characters that you see just get kicked around all the time and they are my favorites. You have Cyrle Figus who is flat out treated terribly. You have Rey who is always getting paralyzed and Archer who is constantly making homophobic comments. The real angle to archer is that he is as the charters put it once again “A colossal deushe”. I feel like the character that they like to “Other” would be Lana because she is the only black member of ISIS. This leads to manny funny arguments and unsettling but outrageous moments that make the show Archer great.